The Content Marketing Institute announced today that award-winning actress, writer, and producer Tina Fey will deliver the closing keynote at this year’s Content Marketing World. She is set to storm the stage on Thursday September 6th, the third day of the conference. 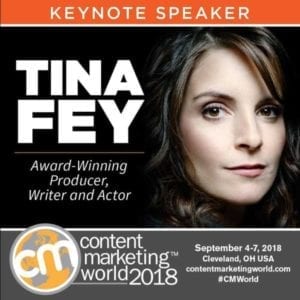 Tina Fey is a groundbreaker in the world of comedy, screenwriting, and production. She is perhaps best known for her astounding nine season run at SNL as head writer, cast member, and co-host of the Weekend Update segment and for creating and starring in the Emmy Award winning sitcom 30 Rock. Her infamous portrayal of Sarah Palin during the 2008 election season won her an Emmy and her work for 30 Work won her six Emmys.

Tina Fey is also known for writing and appearing in the hit film Mean Girls and for co-producing, creating, and writing the Netflix show The Unbreakable Kimmy Schmidt. Fey has starred in numerous films including, Baby Mama (alongside friend and frequent collaborator Amy Poehler), Admission, Date Night, Sisters, and Whiskey Tango Foxtrot.

Currently, Fey is developing the Mean Girls musical. The musical made its debut at the National Theater in Washington DC last October and is set to open at the August Wilson Theater in New York City on Sunday April 8th.

Fey’s 2011 memoir ‘Bossypants,’ is a New York Times bestseller and has sold over 3.75 million copies.

In addition to Fey, this year’s keynote speakers will include Andrew Davis, Jay Baer, Ann Handley, and many more. Additional speakers will be announced as the conference draws closer.

Content Marketing World is a conference unlike any other. This massive, hands-on event gives marketers a place to brush shoulders with some of the biggest names in the industry, reconnect with industry allies and friends, and to get a first hand look at the future of content.

Over 4000 attendees are predicted to converge in Cleveland this September for another round of engaging workshops, sessions, and entertainment and Fey’s appearance is just another incentive to invest in passes. Her relentless drive and infectious wit has been a source of inspiration for creatives everywhere. It’s undeniable that she will have a powerful impact on attendees looking to inject a little more uniqueness into their marketing strategies.

PROMOTIONAL RESEARCH Dominated by retailers, our latest Top 30 Growth Retailers ranking is critical reading in the run-up to Christmas as shoppers increasingly migrate online. As...

The Key to Unlocking Brand Advocacy

How to Use Amazon to Build Your Brand

15 mind-blowing stats about online shopping to guide your 2021 e-commerce...

5 Tips for Managing and Improving Your Online Reputation

20 of the Coolest Marketing Conferences to Attend in 2020

This website uses cookies to improve your experience while you navigate through the website. Out of these cookies, the cookies that are categorized as necessary are stored on your browser as they are essential for the working of basic functionalities of the website. We also use third-party cookies that help us analyze and understand how you use this website. These cookies will be stored in your browser only with your consent. You also have the option to opt-out of these cookies. But opting out of some of these cookies may have an effect on your browsing experience.
Necessary Always Enabled
Necessary cookies are absolutely essential for the website to function properly. This category only includes cookies that ensures basic functionalities and security features of the website. These cookies do not store any personal information.
Non-necessary
Any cookies that may not be particularly necessary for the website to function and is used specifically to collect user personal data via analytics, ads, other embedded contents are termed as non-necessary cookies. It is mandatory to procure user consent prior to running these cookies on your website.
SAVE & ACCEPT
MORE STORIES
Events